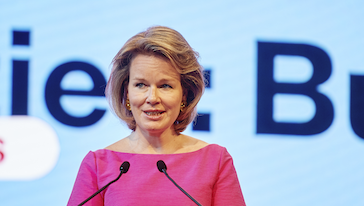 Her Majesty the Queen was born in Uccle on 20 January, 1973. She is the daughter of Count and Countess Patrick d’Udekem d’Acoz. She studied speech therapy and psychology, and worked as a speech therapist from 1995 to 1999. She married Prince Philippe on 4 December, 1999, and they have four children. The Queen assists the King in carrying out his functions as Head of State. These include numerous visits to institutions, contacts with the population, ceremonies in Belgium and abroad, state visits, promoting Belgium’s image abroad, audiences with representatives of various groups in society and countless trips all over the country.

Apart from her activities in the company of the King, the Queen also devotes time to issues that are close to her heart. The Queen deploys the Queen’s Charities to offer help to citizens who are struggling to cope with financial hardship in their daily lives and often turn to her as a last resort. She takes part in the social debate on subjects of relevance to the population. She has a particular concern for vulnerable people. As Honorary President of the Queen Mathilde Fund, the Queen endeavours to assist the weakest members of our society.

The Queen is Honorary President of Child Focus, Foundation for Missing and Sexually Exploited Children. Children’s well-being is for Her a fundamental principle and she dedicates herself in the fight against abduction and all forms of sexual abuse. The Queen is Honorary President of UNICEF Belgium and of the Breast International Group, a non-profit organisation for breast cancer research groups from around the world. She was the World Health Organisation Europe’s Special Representative for Immunisation.

Her Majesty Queen Mathilde of the Belgians