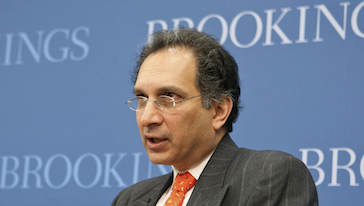 Homi Kharas is a senior fellow and deputy director for the Global Economy and Development program at the Brookings Institution. Formerly a chief economist in the East Asia and Pacific Region of the World Bank, Kharas currently studies policies and trends influencing developing countries, including aid to poor countries, the emergence of a middle class, the food crisis and global governance and the G20. He has served most recently as the lead author and executive secretary of the secretariat supporting the High Level Panel, co-chaired by President Sirleaf, President Yudhoyono and Prime Minister Cameron, advising the U.N. Secretary General on the post-2015 development agenda. His most recent co-authored books are Getting to Scale: How to Bring Development Solutions to Millions of Poor People (Brookings Press, 2013); After the Spring: Economic Transitions in the Arab World (Oxford University Press, 2012); and Catalyzing Development: A New Vision for Aid (Brookings Press, 2011).

When Ryszard Kapuscinski was addressing development issues, the world was clearly divided into blocs: the First World of advanced capitalist countries; the Second World of communist and socialist states; and the Third World of impoverished nations. There was little connection between these worlds and even less understanding or desire to be informed of others’ conditions. Kapuscinski’s great contribution was to bring these divides into focus and to help people in one bloc understand what was happening in other blocs, especially in the Third World. Today, such distinctions are irrelevant. Thanks to social media there is a torrent of information about everyone’s lives, sometimes accurate, but sometimes distorted. With globalization, people are also more concerned with, and aware of, what is happening in other countries. There is a greater continuum among countries along the development scale. Countries can no longer be easily classified into simple categories—both China and India have space programs as well as pockets of abject poverty. Should they be called underdeveloped? In many instances, the challenges of development today are as much about the distribution of income and differences in living standards of people within countries rather than between countries. Many of the issues that Kapuscinski wrote about remain relevant today. His stories of revolutions, coups and wars have today morphed into stories of “fragile states,” but the basic concept is the same. States without governments that enjoy the support of their own populations provide staging posts for outbreaks of violence and extremism and cannot be expected to develop. The nature of violence may have shifted from wars and revolutions to non-state actors and criminal elements, but the problem remains.

Kapuscinski was intimately concerned with people and people’s voices. He would find the idea of working for the collective good rather strange. But this does not mean that sustainable development is merely aspirational. It means that we need to find ways to connect global problems and issues more closely with people’s own lives and livelihoods. For example, it is no accident that China is emerging as one of the world leaders in low-carbon technologies. This is largely because China’s cities have become so polluted that citizens cry out for better solutions. The hugely positive impact on the rest of the world is a convenient by-product. What remains unclear, however, is whether these win-win incentives will be sufficient to achieve the pace and scale of the needed global change. So far, there are still plenty of win-win solutions available. We’ve not yet tested the frontier where real trade-offs might become necessary.

These connections between global issues and national issues must be made by leaders at the State and community level. Kapuscinski wrote extensively about leaders and their personal idiosyncracies. These could easily become the most important obstacles to development. Then, as now, the foibles of leaders were revealed. In The Emperor, he was characteristically forthright: “the King of Kings preferred bad ministers. And the King of Kings preferred them because he liked to appear in a favorable light by contrast.” Such idiosyncracies, and the personal patronage that leaders use to retain power, remain central obstacles for development, creating the conditions for widespread corruption, bribery and flattery, as well as the dimming of individual enterprise towards betterment of family and community. All of which we refer to today as “bad governance” but that was described by Kapuscinski as the lack of institutions and reliance on personalities in all political systems. Yet despite these failings, there has been astonishing progress since the time when Kapuscinski was writing. In his long career, he never witnessed the transformation of societies in the same way as modern development practitioners have. Take the case of Lao PDR, one of the poorest countries in the world in the mid-1980’s. When I first went in 1988, Laos had a GDP per capita of only $308 according to the IMF. Small boys would turn their heads to look at my car, such was the rarity. They “fished” for bats to be made into soup in the capital city of Vientiane. Shortly thereafter, Laos started a program of reforms and development of its considerable hydropower and minerals sector. Today, in the span of one generation, Laos has achieved a GDP per capita of $2,700. Even adjusting for inflation, it is four and one-half times richer than thirty years ago. Development progress has been halting and uneven, with many of the problems of governance so richly detailed by Kapuscinski, but progress in material conditions of the people has been real: life expectancy has risen from 54 years to 67 years (1990 to 2015); expected years of schooling has risen from 6.7 years to 10.8; over one third of the population now has at least some secondary education; and so on. While still a poor country, Lao PDR offers opportunities for a new generation that were unthinkable for the last. It is being transformed.