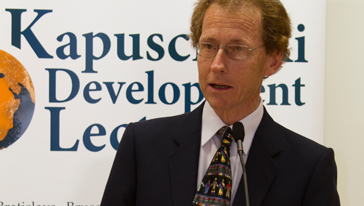 When Ryszard Kapuscinski was putting pen to paper, the biggest global challenge was human poverty, including high mortality among children and mothers, widespread malnutrition and persistent illiteracy. Since then, respectable progress has been made. Perhaps the most striking statistic is that some 18,600 fewer cases of infant and child deaths occurred each day in 2015 compared with 1990; notwithstanding the significant rise in the world population over that period. But progress was not observed across the board. Deforestation, overfishing and pollution has continued unabated, jeopardising the planet’s biodiversity, and greenhouse gas emissions have soured. The picture can be summarized by the one-liner Progress for people, regress for the planet.

Whilst human poverty still requires hard work, it no longer constitutes the prime global challenge. The most pressing one now is twofold: sustainable and equitable development. The world is not facing two separate challenges—environmental and societal, with fragmentation and polarisation of all sorts—but one complex inter-connected challenge in which inequality occupies a central role. Evidence shows, for instance, that people in more equitable countries are more environmentally friendly across the board: they consume less water for personal use, produce less waste and emit less CO2. 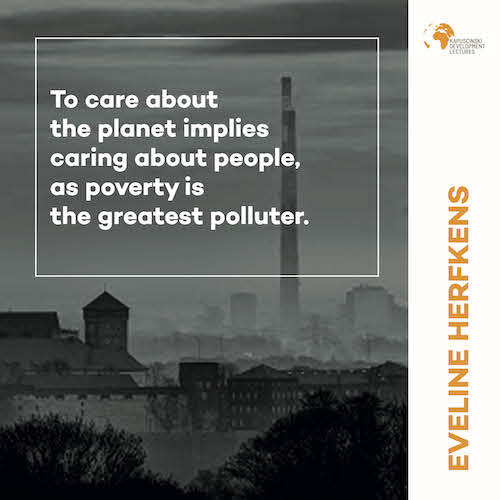 Although the SDGs represent a better framework to respond to this dual challenge than did the MDGs, they are too muddle-headed to be effective. The goals regarding climate change and inequality rank in thirteenth and tenth position respectively—suggesting they do not really constitute top priorities. Moreover, their relevant targets are flawed. The stated target for inequality aims to ‘progressively achieve and sustain income growth of the bottom 40% of the population at a rate higher than the national average’. The metric for inequality is faulty because it fails to capture the entire distribution and ignores the top 10%. Inequality is not only due to the poverty of the poor but also to the wealth of the wealthy. It is perfectly possible for a country to meet the above-mentioned target and yet witness an increase in inequality. If faster income growth for the bottom 40% is based on transfers from the next 50% whilst the top 10% of the distribution are left unaffected, then the country will indeed see a rise in inequality. A hollowing out of the middle class is being observed in many a country.

The significance of high inequality cannot to be underestimated, because it influences the way people feel, think and act. We do not only crave for status and constantly compare ourselves with others, we also mimic the behaviour of others, especially those at the top, to whom we look up in awe whilst feeling contempt for those lower on the social ladder. We inadvertently internalise the values, the opinions and even the interpretation of events of those whom we admire. This can have deleterious effects on our moral sentiments, giving rise to more incivility. People voluntarily abstain from acts that are individually beneficial but socially harmful as long as others do so too. But once wealth is perceived as an entitlement to selfish behaviour, it will quickly cascade down the social ladder and good behaviour quickly evaporates. Psychology professor Paul Piff conducted experiments that show that respondents who were made to feel rich were ‘more likely to break the law while driving, to exhibit unethical decision-making tendencies, and to cheat to win a prize’. Other studies reveal that individual tendencies of self-absorption, bragging and self-aggrandisement are most prevalent in more unequal countries. In short, high inequality harms more than just the economy; it affects all aspects of development.

Considerable work remains to realise the potential of the SDGs. The good news is that several of their flaws can be fixed. First, each and every country must cut the long list of SDG targets to a manageable level by prioritising them to fit the reality on the ground. Second, the fuzziness of many SDG targets must be swapped for conceptually clarity, because wooly targets cannot be verifiably monitored. Third, numerical outcomes must be tailored to reflect local realities. It is unreasonable to expect that all countries will progress at the same rate. Global targets are always collective in nature, and must never be imposed on each country individually. Selection and adaptation are urgent steps, given that the SDGs have gotten little traction so far. One thing I have learnt is that development is always context-specific, driven by local priorities, local actors and local institutions. There can be no universal agenda with one-size-fit-all targets for all countries. International and regional organisations are yet to take effective steps to encourage and support member states in selecting and adapting the SDGs to their specific situation.

Finally, more fitting indicators must be selected to monitor progress. Regarding income inequality, the Palma ratio—income share of the top 10% divided by that of the bottom 40%—is a better metric because it covers more of the distribution than just the bottom 40%. In addition, all vital statistics and other relevant indicators for human development must be equity-adjusted, by attaching more weight to the lower quintiles than to the higher ones. Given the increased availability of better and more disaggregated data, it is now possible to adjust key national indicators to reflect inequalities within a country, following a straightforward methodology for producing equity-adjusted statistics. By embedding inequality into national statistics, countries will occupy a different place in international rankings, depending on how unequal they are. This is likely to generate a much-needed focus on inequality across the board, which is overdue because high inequality constitutes a major hindrance to achieving sustainable development.

Jan Vandemoortele, PhD., co-architect of the MDGs, served with UNDP and UNICEF in various countries and at headquarters.