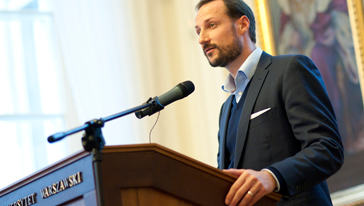 The Crown Prince Haakon of Norway described the MDGs and their priority target to halve the proportion of people living in extreme poverty by 2015. He stressed the progress achieved so far in bringing at least 400 million people out of extreme poverty compared to 1990.

On a global scale the poverty rate in developing countries decreased from 46 to 27%. According to the Prince Haakon also the primary education improved among boys and girls, the number of new HIV infections is going down. The Crown Prince described most thoroughly the goal related to child mortality which aims at decreasing the rate by two thirds by 2015. Twenty years ago over 12 million children before the age of 5 were dying annually from preventable diseases. In 2010 this number decreased to 7.5 million. This presents an obvious progress however we will most probably not achieve this goal by 2015 – said the Crown Prince.